Time to enter the ballot

The VMLM ballot had opened, and as with the other 400,000 plus other applicants I put my name in the draw and expected to get the jacket. At the end of May 2018 I spotted a Strava challenge through the Lucozade Sport group. Register a 5km to the group and have a chance of winning 1 of 100 places in the Virgin Money London Marathon 2019. Another chance of an entry, and nothing to lose, I registered a parkrun and forgot all about it.

June 2018, and I receive an email from Lucozade of congratulations as I had been chosen as one of the winners of a place in the VMLM 2019. I didn't believe it at first, as the email was asking for my personnal details. My first thought was it's a scam. After two days, I decided to reply to the email with my details with a final thought of "I can junk the emails and block any calls if it is a scam". 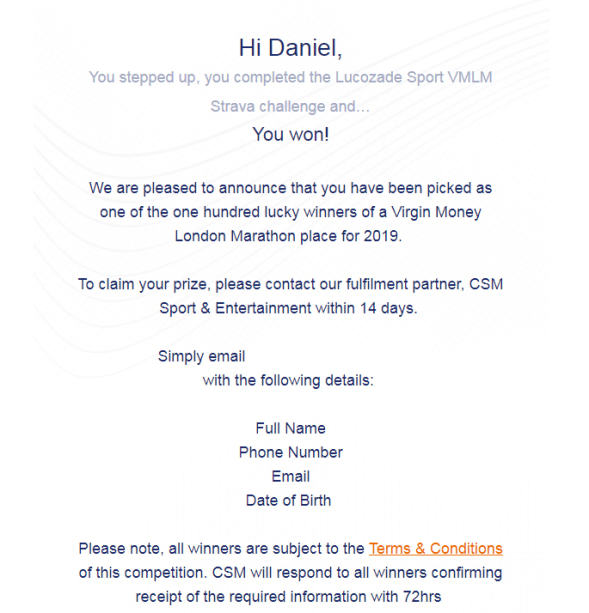 The email to change my life

I tried to keep it quiet from Kirsty, and I did, for about a week! Was this the best prize I have ever won or the worst prize? Only training and race day could make my mind up.

My first thought was now on training. As I haven't really put any effort in to training for the past two years due to not having my mind focused on running. 10km races were just becoming plods, parkruns were just an excuse to get out of the house on a Saturday morning and have some cake and midweek runs were few and far between, mainly on a if I feel like it adhoc way.

I had one big event to get through in 2018, the Ironman 70.3 relay half marathon in August. Maybe I should start training for that? Instead, I decided to start on my marathon training plan. A quick look through some apps, and I found the Asics training app. After entering some more details, the app came back with a 41 week training plan and it was then that I decided I should really stick to it. A marathon, 26.2 miles, over four hours of running, over four hours of being inside my head! I didn't really enjoy half marathons, and now I was signed up for the London Marathon.

Kirsty had offered help and advice, well her main advice was; "Don't enter a marathon". Kirsty's mum Liz was also on hand for tips and training advice as well. Along with Team SRG and Team Bushy, I had a wealth of knowledge and experiences to call on.