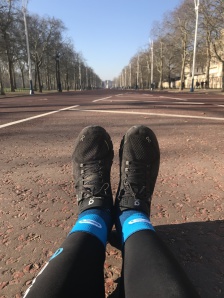 After 41 weeks of training, carb loading and staying out of trouble for the week before race day, I woke up on the 28th April and just had a panic! I had a similar panic on the Thursday before race day at the Marathon Expo when I was collecting my race pack. My first thought was "I don't belong here!" I still didn't think this was happening as I was on the train to Waterloo with other runners. No matter how many times I looked at my race number, kit bag or timing chip I still didn't think I was taking part, or when I get the the Green Start area I would be marched away for being a fraud and banned for life from all future LM events!

The crowds weren't helping my panic, I don't really enjoy crowded places or trains and I had both, as did the other 42000 plus other runners, then the familes, supporters, marshals ect. Anyway, I stuck to my plan of eating some snacks and enjoyed the warm up along Maze Hill! I decided to finally put my full running kit on before entering the start zone. Purple boots on, Lucozade team shirt put on, number straight, dumped my lovely (but Kirsty hated it) grey towelling track suit and headed into the start area.

I spotted some familiar faces from Shepperton Running Club! In total  Team SRG had 11 runners in the marathon, plus there were more members out marshalling in the final 800m! The Green Start area was quiet, very quiet compared to London Bridge station and the train to Maze Hill. I was starting to relax when Ian appeared who I know from Bushy parkrun. He had just completed a 10km warmup run from Waterloo station to Maze Hill, LOONY!!

I dumped my bag, and headed off to the toilet, hopefully for the last time. I was remembering where known support groups were standing. Nicola just after Mile 9, Team Bushy around Mile 12, Ben and family (Kirstys brother) at Mile 15 with some spare gels if required, Kirsty, my family and some friends from Gibraltar at Mile 20, Team SRG on the Highway, and finally marshalling along the final push.

Finally we get called to our start zone. butterflies now flying, and we started mooching down our start zone. I thought I needed a wee as the first two zones left. Zone 6 was moving down to the start line as I finally realised I was busting for another pee. I wrote that off as just butterflies and fear. Finally we were released on to the course, my first marathon was underway for the massive total of two miles! By this time I was busting for a pee, and I had to stop. Straight into the portaloo and I had what felt like the worlds longest pee.

Back out on the course I made a mistake, trying to make up for lost time in the loo, and sped up a bit too much. Once I realised coming down to the third mile marker I backed off the power and settled back in to my desired six minute kilometre pace. The first 5km completed in just over 30 minutes, excellent! My next aim was around an hour for 10km, boom, near enough spot on 1 hour and 1 minute. I was feeling good and the crowd was keeping me going. Well, I was keeping the crowd out of my head. I just switched off and went into my own little running world, keeping an eye on my pace, trying not to take on any water on unless needed (famous last words!). Finally I got to see the first famous sight on the course, the Cutty Sark. All I remember was thinking one of my training runs from Teddington ended at the Cutty Sark, and then a day exploring the old ship! Time to plod through the rest of Greenwich!

15 and 20km went past still in my pace zone, around 31 minutes per 5km and still everything was feeling good. The only thing, I had missed the Team Bushy cheer point! Just as I plodded along Tooley Street. Now, being an ex motorcycle courier, a Londoner and just an explorer in the captial city , I know what comes around the corner at Tooley Street, but to see it during the marathon is a diifferent feeling. My feeling and lasting feeling was being pissed off! Runners stopping for selfies in the middle of the road, runners phoning someone telling them where they had got to, phones need to be banned!

I finally made my way through the stupid zombie runners and headed towards half way, crossing the 13.1 mile mark in two hours ten minutes. Ok, I was behind on pace slightly, I had taken on two gels and no water. Spotting the speedy runners heading on their final stretch to the finish was good! Finally off of the Highway, I headed on to Narrow Street, and my back up gel station. As I headed along the street, I spotted Ben in his Team Bushy hat! I shouted I didn't need my gels and headed off towards Kirsty at mile 20.

This is where my race started to go wrong. I had buggered up on my hyderation, I know that now! After mile 16 I needed to stop in the loo again! I spotted the loos at Westferry Circus, but there was a queue, and decided to try and hold on until mile 17. This was getting tougher! Just before the mile marker, my left knee started to cramp up slightly, so I backed off a bit, saw the portaloos and queued up. Another pitstop and I was not a happy runner! I sped up a lot this time, to get to mile 20! Every ten minutes or so my knee started to feel like it was going to cramp up, so I backed off, changed my running style slightly just to try and stretch my muscles.

Mile 20! Hello Kirsty! I had decided I would stop for a snog, hug and a gel or something else. No gel but a Marmite and cheese cracker! A quick chat to my A support crew and off I bibbled back on to the course! As I passed the Mile 20 arch, it finally dawned on me, 10km to go and I can walk it from here and still not finish last!!

Considering I was now into a battle between the voices in my head saying quit, my left knee saying quit and my toilet breaks buggering me up, I was not going to be defeated!! Finally coming back along the Highway towards the finish. Yes, seeing the slow runners heading along the road towards Docklands was rather nice, it gave me a smug feeling but also made me proud of these slower runners still going and coming up to half way!

My courier mind had switched in and each street being name as I run along them. As I go onto the Embankment, I finally had enough of my cramping knee and decided on a Jeffing run. I could keep it togehter and finish well with in my goal time range! I was now plodding along, the crowd shouting "Come on Dan!", and this was about the first time I started paying attention to the crowd. At mile 23 was the Lucozade cheer zone! As I entered the zone I spotted myself on the big screen, and the supporters started cheering for me as I went through the zone, and I even managed to keep up a run.

I could see Westminster Bridge approaching, and I was still run walking. I finally decided it was time to put on a show for the Team SRG marshalls. I finally started to get a running pace I was comfortable with. Now and again I would get a pain through my knee, but I just backed off a little and kept plodding along. I spotted the paramedic team running with their Ambulance costume and I was not going to be beaten by them!

I passed the ambulance at 800m to go and was now flying (at a very slow bibble) along Birdcage Walk. I could see the 400m to go sign and crossing. I spotted Captain Steve with the tape, shouted at him as he realised it was me, I had already bounced passed, got hi-5s from Mark, Alex, spotted Jonathon and Ayee! I was on the last corner and I could see the finish. I stuck to the outside, which was a good plan! A fellow Stava / Lucozade Sport competition winner was with me as we tried to get as much strength as possible out of our legs to cross the finish line. We had done it!

As we walked through the finish area, a man with a clip board checked I had a timing chip on, the next lady place a medal over my head and said "well done!". I said thanks, and wandered off to get my goodie bag. T-shirt and goodie bag collected, and I found an apple right on the top, and scoofed it in about 2 seconds! That was the best apple ever!! Finally, I was reunited with my kit bag, bared my backside in Aunty Liz's front garden as I struggled to get my sweaty running kit off. A bit more walking and finally I made the phone call to Kirsty to say I had finished, even though she knew as she had my phone!

As I finally escaped The Mall and headed the wrong way to Horse Guards,, I finally made it to Trafalgar Square and spotted Kirsty and support crew! I actually managed a jog across to them, no idea where that came from! I placed my medal over my great-neices head and grabbed Kirsty for another snog! It only took ten minutes before she told me she has done 3 marathons quicker than my first!

I rescued my medal back from Jamie, said thank you to my support crew, pictures taken and we headed on our wander to Waterloo Station, Starbucks then home! 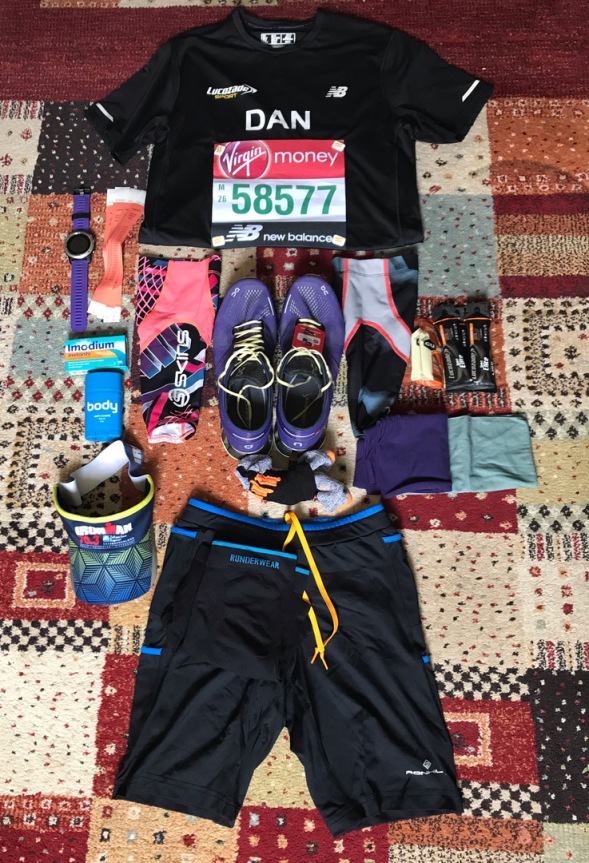 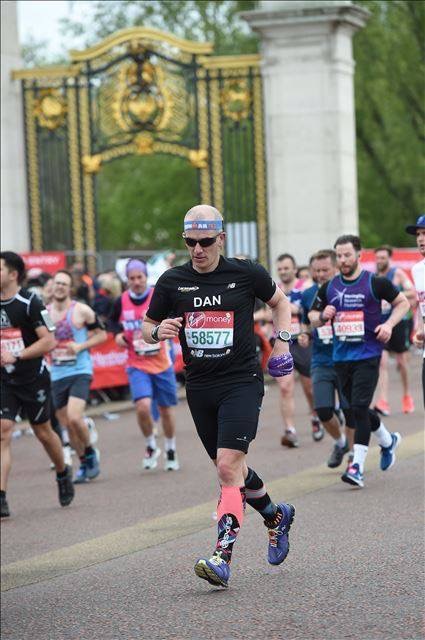